To find out more about cookies, what they are and how we use them, please see our privacy notice, which also provides information on how to delete cookies from your hard drive.

The economy finished 2017 on a strong note, with YoY GDP growth accelerating to 6.5% in Q4 from 1.1% in Q3 thanks to a sharp rebound in the Trade, hotels and restaurants sector, driven by inclusion of diamond aggregation process under this sector. Full-year growth, however, came in at a modest 2.4%, down from 4.3% recorded in 2016. On the political front, Ian Khama stepped down as president on 31 March after serving a decade in office. His former vice president, Mokgweetsi Masisi, was sworn in the next day and will serve as president until elections are held in October 2019. 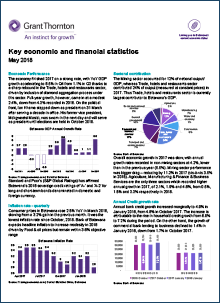