To find out more about cookies, what they are and how we use them, please see our privacy notice, which also provides information on how to delete cookies from your hard drive. 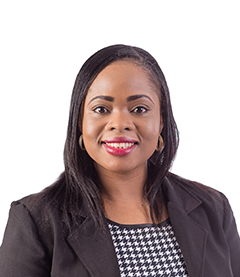 Chioma is a Manager in the Business process solutions. She has been with Grant Thornton for over 7 years. Prior to joining the firm, she worked as a Bursar and an Accountant at Livingstone Kolobeng College (LKC).

Chioma joined LKC in 2009 as a Bursar after completing the Association of Accounting Technicians (AAT) qualification. She thereafter pursued the Association of Certified Chartered Accountants (ACCA) qualification, and was promoted as the Accountant in charge of the preparation of accounts and supervision of 2 Accounts Assistants and Bursar. Upon completion of ACCA in 2012, she continued as the Accountant at LKC until 2014 when she joined Grant Thornton as an Executive Trainee.

Chioma’s experience includes secondment as an Accountant at BOFINET for a year, as Finance Manager at Corbett electrical for 3 months, and as Finance and Admin Manager at HATAB for over a year. Chioma was part of a team that we engaged by Debswana to review a newly implemented BHAG scheme. She anchored the introduction and implementation of a new accounting software called Xero and conducts the trainings on the use of the software.

She was in charge of secondment assignment at Botlhale School where her duties included payroll processing and supervision of the accountant. She has also completed a payroll health check assignment at Botswana oil.

Chioma has been involved with the preparation of management accounts, finalisation of accounts for audit purposes, bank reconciliation, general ledger reconciliation and company and individual tax computation for clients from various sectors such as telecommunication, hospitality, architectural, mining, trading etc

Chioma is a member of ACCA and associate certified professional member of Botswana Institute of Chartered Accountants (BICA). She has completed AAT and ACCA.

Chioma has extensive experience operating various software to execute accounting methodology, such as XERO for cloud-based accounting, PASTEL for general accounting and CaseWare for finalisation of accounts. Furthermore, he is proficient in using Microsoft Office applications to bring quality to different assignments.

In her personal capacity, Chioma works closely with less privileged students of Bophirima Primary School and Philip Mosotlhe Primary School. She is also a donor at Child line, and regularly buys groceries for the poor in the inner cities.

Chioma was a member of Grant Thornton’s corporate Toastmasters club, which has facilitated development of communication and leadership skills. She served as Sergeant-at-arms in 2017/18, Vice President Education in 2019 and President in 2020/21.